Cranes in the Sky – Which Australian Cities are Growing and Where?

Australian capital cities have gone through a volatile period of growth and construction over the past few years, with housing prices skyrocketing and residential construction rising to cater to the swelling population.

Although towering winches have become a common sighting in Australian cities, this accumulation of cranes offer an interesting insight into construction sectors across Australia.

Although towering winches have become a common sighting in Australian cities, this accumulation of cranes offer an interesting insight into construction sectors across Australia. Rider Levett Bucknall (RLB) has released their observations in the latest Australian Crane Index for the closing quarter (June) of 2017.

Studying crane activity across Australia offers an alternative source of information concerning the health of the Australian construction industry. Statistics regarding sector-based construction, state-by-state comparisons, crane heat maps and overall nationwide activity can be used to actively identify the condition of each city, state and suburb on a project-to-project basis. 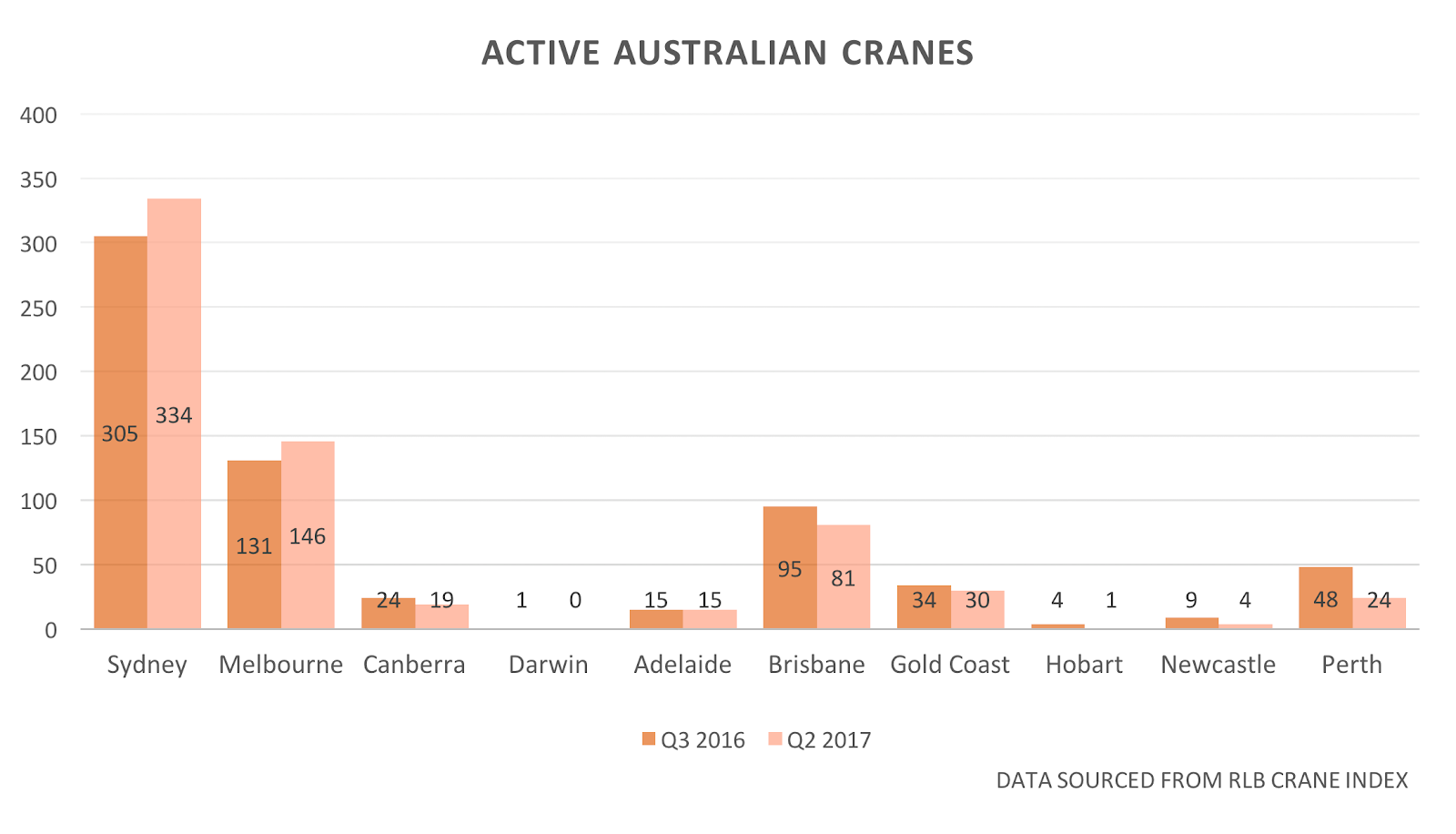 A decrease in large-scale projects and financing, along with an increase in competition has driven a decline in active Australian cranes for the first time in the five-year history of the RLB crane index. In September 2016, there were 666 active cranes across Australia’s leading cities. Now, in June 2017, there are 654 active cranes, indicating a decline of 12. Sydney remains towering above the rest with 334 active cranes, amounting to 51.1% of all Australian cranes, increasing on the original 305 in 2016. Melbourne comes in second with a 15 crane increase from 2016, landing at 146.

Construction of residential property has continued to dominate over other sectors. 548 cranes, representing 84% of all Australian cranes, are now being actively used to construct future residential buildings. Commercial projects come in second, accounting for 20 (5%) active cranes across Australia, a fall from the 35 reported in the last survey.

The RLB Crane Index also offers a closer analysis of each individual city. For example, they use hot spot mapping to identify the most active construction areas, which might suggest increased job opportunities and future construction trends. With the large majority of cranes across Australia accounting for residential property construction, it can be assumed that the ‘hottest’ areas also imply a rise in suburb-based population and foot traffic.

Sydney, having 147 cranes erected for new construction projects and 118 cranes removed from completed projects since the last report, has a far more scattered crane heat map in comparison to other Australian cities.

When looking at Melbourne, the CBD and surrounding suburbs hold 43 (30%) of Melbourne’s active cranes, with the eastern suburbs accounting for 28 (19%), and the north, south and west accounting for 30 (20%), 35 (24%) and 10 (7%) respectively. Melbourne’s residential construction sector makes up 84% of all cranes installed, with major residential projects such as Playhouse and Pavillion in Abbotsford, Botanica in Balwyn, Toorak Park in Armadale and Rita in Bentleigh, nearing completion.

Sydney, having 147 cranes erected for new construction projects and 118 cranes removed from completed projects since the last report, has a far more scattered crane heat map in comparison to other Australian cities. Construction appears to be focused along the main corridors and motorways of Sydney, running north, west and south and is scattered throughout most of Sydney’s suburbs. Focused residential cranes can be found in Paramatta (15), Wolli Creek (12), Epping (9), Homebush (9), Nth Ryde (8), Surry Hills (8), Wentworth Park (8).

Overall, Australian crane activity indicates a shift in state-by-state economic activity over the past few years, as construction activity continues to fluctuate due to changes in supply and demand. New South Wales and Victoria have held strong and continued to rise, while the back-end of the mining boom means major construction ceasing in Western Australia, Queensland, and Northern Territory. Residential, health, retail, and civil sectors have shown an increase, unlike commercial, educational, civic, recreational, and hotel sectors.

As housing prices across Australia continue to fluctuate and significant government-funded projects such as train lines, roadways, and improved infrastructure gain approval, crane activity will continue to shift between sectors and states. After all, the city skyline remains ever-changing.